In 1980, when Mark Terrell was president of the Corvallis Rotary Club, he recognized the need for a new club in Philomath. When Bob Holcomb became president, he assigned Mark the task of organizing a new Philomath club. Mark enlisted the required twenty charter members and applied for a club charter. After meeting as a provisional club for a year and a half, the Philomath Rotary Club celebrated its Charter Night on February 17, 1982.

Don Anderson knew of an elderly local woman who used her bicycle and a cart to collect food from grocery stores and deliver it to friends who needed food and help. The Club decided it should help formalize those individual “meals on wheels” efforts to be able to serve more people. That was the beginning of the Philomath Food Bank, which has since incorporated as Philomath Community Services.

A related project was the Philomath Baby Bank, which provides parents in need with everything from diapers and toys to cribs and car seats. Clothing is also available for toddlers and preschoolers. The Baby Bank operates on an all-volunteer basis out of a double-wide manufactured home donated by the Starker brothers and located behind the Philomath Fire Department building. Donations of furniture and clothing are sorted, cleaned, and repaired as needed.

In 1993, the Club gathered about 35,000 school textbooks—enough to fill a shipping container—and sent them to Uganda. A current project involves working with three Rotary clubs in central Mexico to help outfit a medical clinic and provide blankets for the indigenous Indian population in the nearby mountains. Working with a Rotary club in Chile, the club financed a covered playground area for a school in Chile.

The club has adopted a two-mile stretch of Highway 20 west of Philomath. In 1994, members obtained a tiny parcel of land along the highway in the center of town to place a reader board sign that allows all Philomath schools to announce events and activities. 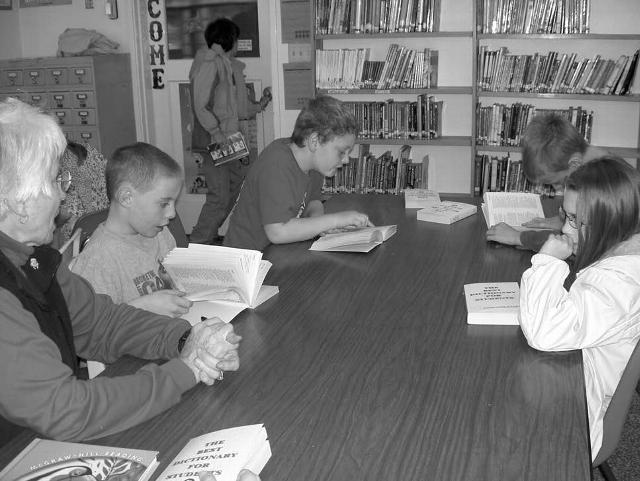 In 1999, the club started a tree planting project in Philomath. Involving Philomath High School and the Philomath Lions Club, lovely trees were planted on Main, Applegate, and College Streets. Philomath was awarded a city beautification award for the trees. In 2004 the club initiated a project to distribute dictionaries to all third graders in Philomath and rural Benton County. For its Centennial Year project, the club helped develop Westbrook Park in Philomath.

Each year, the Club selects a Businessperson of the Year in Philomath. Each month a middle school student is selected to receive Student of the Month honors. Philomath Rotarians have contributed to the Philomath Library project by building benches, painting, and providing financial support.

Perhaps the most impressive work of the Philomath Rotary Club involves its international student exchange program. All clubs participate in international exchanges, but according to past President Mal Miner, the Philomath Club has the highest per capita participation of any other club in the state. One year, the Philomath Rotary sponsored four outbound students, two each from Philomath High School and Alsea High School. Since the Club’s inception, the exchange program has involved about sixty high school students.

The Club has also sponsored five Rotary Scholars, or Ambassadorial Scholarships. These students receive scholarships of between $22,000 and $25,000 per year to work on master’s degrees in a foreign country. “It’s better than either the Rhodes Scholarship or Fulbright Scholarship programs,” says Mal. For a club that has rarely had more than thirty members at a time, it’s an impressive record of service to the community.