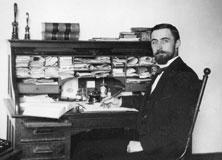 Eddy Elbridge Wilson was born in Corvallis, Oregon, on October 26, 1869. He was the son of Lewis F. and Rose J. Wilson. He lived his entire life as a resident of Corvallis and watched it grow from a village of 600 to the fifth largest city in the state with a population of over 20,000 at the time of his death on April 3, 1961.

E.E. Wilson, as he was generally known, attended public schools in Corvallis. In 1884, when he was a teenager, his pioneer parents moved from Second Street out into the country near Tenth and Monroe Streets. Mr. Wilson attended Corvallis College, the predecessor of Oregon Agricultural College, when it was housed in a single building on Southwest Fifth Street. Benton Hall, the first building of Oregon Agricultural College, was built at that time, and he attended classes there for his senior year, graduating in 1889. He went on to law school, earning his L.L.B. from the University of Oregon. In 1893 he hung out his shingle in Corvallis. E.E. Wilson was named city attorney around 1910 and served three terms in this capacity. He drew up the first assessment procedures used by the city in financing street and sewer improvements. He was appointed District Attorney by Governor Oz West when the district covered four counties.

In 1918, E.E. Wilson, along with E.R. Bryson and J.F. Yates, formed the Benton County Abstract Company, and he was named managing director. Mr. Wilson became president of First National Bank of Corvallis in 1925 and retired from his practice of law at that time. He served in this capacity for two years, then acted as chairman of the board of directors for the following thirteen years. His career included membership on the Board of Regents of Oregon State College for many years. Mr. Wilson was a member of the original board of governors of the Memorial Union at OSC in 1925, continuing in this position until his death.

E.E. Wilson served on the Oregon State Game Commission for many years and was its chairman for ten years. The E.E. Wilson Game Management Farm at Adair was named for him in 1954 in recognition of his outstanding years of service. He was considered a pioneer in game preservation and throughout his life he devoted much time to fish and game work.

Mr. Wilson was a member of Corvallis Rotary Club, Corvallis Lodge #14 A.F. and A.M., Ferguson Chapter R.A.M., Al Kader Chapter of Mystic Shrine, Corvallis Lodge B.P.O.E. Elks #1413, and the Men’s Garden Club. For over twenty years he and W. M. Harper and Vane Gibson served on the Board for the Corvallis Masonic Fraternity in the operation of Crystal Lake Cemetery, and through their efforts permanent care for the cemetery was established. His hobbies included fishing, hunting, gardening, and photography. His friends say that he mastered whatever he undertook.

Mr. Wilson never married — “I was just too busy,” he told a reporter on his ninetieth birthday. Throughout his life, E.E. Wilson was one of the first citizens of Corvallis. His contributions to the community, the college, and the state were numerous and notable and his name lives on through his many philanthropies. He left the bulk of his estate for a variety of philanthropic purposes. The Corvallis Public Library fountain was donated in memory of his parents. Part of his estate went to The Eastern Star Home and part to Oregon State University for scholarships to Benton County residents.

E.E. Wilson made a very generous bequest to the Benton Community Foundation for the benefit of Boy Scouts of America activities within Benton County. Mr. Wilson had missed being a Boy Scout and wanted others to have this opportunity. The E.E. Wilson Fund has awarded camperships to many local boys, enabling them to participate in summer scout camp. The fund has financed training for both junior and adult leaders at Camp Baker in Oregon, Philmont Ranch in New Mexico, and Woodbadge courses in Idaho and Washington. The fund has also enabled local boy scouts to make purchases of needed equipment: audio-visual equipment to be shared by local troops include films, a projector, and a phonograph; a seventeen-foot aluminum canoe for the Sea Scouts; and a two-way radio used for search and rescue activities for the Explorer Post.