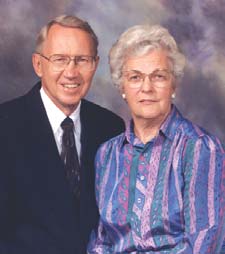 Pharmacy students benefited from the teaching and guidance of H. Wayne Schultz for 32 years during his career as a professor of pharmacy at Oregon State University. Although Wayne died on April 13, 2008, his presence will be felt in perpetuity through the H. Wayne & Edna M. Schultz Scholarship Fund. Edna, Wayne’s beloved wife of 53 years, created the scholarship fund to reflect Wayne’s commitment to pharmacy education. The fund will help Benton County high school alumni who have earned their pre-pharmacy bachelor’s degree to enter the three-year professional program at OSU. Financial need will be considered when selecting recipients of the scholarship.

Edna and Wayne met on a train in December 1953. Wayne had been drafted during his first year of graduate school at the State University of Iowa (now the University of Iowa) and was on his way to Fort Lewis, Washington. Edna had graduated from Pacific Lutheran College in Seattle and was on her way to Tacoma to visit friends over the Christmas holiday. It was love at first sight. Following a two-year courtship, they were married on June 25, 1955, in Portland.

After two years in the Army, Wayne returned to Iowa and completed his master’s degree in 1957 and his doctorate in pharmaceutical chemistry in 1959, while Edna kept the home fires burning. The couple’s first two daughters, Linda and Karen, were born in Iowa. In 1959, Wayne was hired at Oregon State University and the family moved to Corvallis. The couple’s third daughter, Margaret (“Meg”), was born in Corvallis. After the girls were older, Edna taught in the Philomath School District for 28 years. Edna earned a master’s degree in education in 1980 and Wayne earned a master’s degree in business in 1992 at OSU.

Wayne co-taught medicinal chemistry courses and was in charge of the required pharmaceutical analysis course at Oregon State. Later, he focused on nuclear pharmacy and taught an elective course on the subject. During his time as an educator, he was an advocate for his students and was a faculty advisor for the student chapter of the American Pharmaceutical Association.

Karen and Meg also pursued pharmacy careers. Karen works at Kaiser Permanente in Portland. Meg works at Samaritan Albany General Hospital in Albany and is also an inspector with the Oregon State Board of Pharmacy. Linda recently retired after a 30-year teaching career in the Corvallis School District.

Wayne and Edna lived an active life together that included extensive travel domestically and abroad. They have been active members of Grace Lutheran Church. Soon after they arrived in Corvallis, they became part of a gourmet club that formed in 1959 and is still together after 50 years. They also enjoyed ballroom dancing and were members of three dance clubs over the years. Wayne was an avid basketball player and the couple held season tickets to Beaver basketball and football during Wayne’s academic career. Edna enjoyed traveling and spending time with her children and grandchildren. She passed away in 2016.