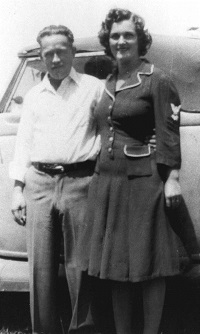 Herb Ballard was born Feb. 16, 1909 in Madill, Oklahoma, and Peggy Barry was born June 3, 1920 in Millcreek, Oklahoma. Herb and Peggy lived on neighboring family farms in their younger years. When Herb was in his late teens and early twenties, he left home to “ride the rails,” working in Southwest Texas and New Mexico as a ranch hand. He and Peggy married June 21, 1936, after he returned home. Although Peggy was too young to marry without an adult’s consent, Herb’s sister, Bonnie, signed for her. The couple settled near Berwyn, Oklahoma (now named Gene Autry after the singing cowboy). Their first son, Jerry Don, was born the following year. Their second son, David, was born in 1939. Their first daughter, Gwenda, was born in 1940—the first child to be born in a hospital. In 1941, when farming became difficult in Oklahoma, Herb moved to San Diego, California, to find work. He worked at Consolidated Aircraft Corp. during World War II. Peggy and their three children followed in 1942.

In 1945, while they were in California, their second daughter, Judy, was born. When the war ended and the aircraft plant was shut down, the family moved back to Oklahoma for a brief time. Herb’s cousin talked him into moving to Oregon where there was plenty of “green gold” (timber). In 1946, Herb, Peggy, and their two daughters moved to Alpine, Oregon, to stay with Herb’s cousin while Herb got started as a logger. Jerry Don and David had already started school, so they stayed behind with relatives, eventually traveling to California with Herb’s sister, Bonnie. Herb picked them up there and brought the boys to Oregon. Five more children arrived after the family moved to Oregon: Jean in 1948, Gary in 1950, Robert in 1952, Rick in 1953, and Terri Sue in 1955. The family eventually moved to Glenbrook, then to Irish Bend, and finally settled near Monroe after Herb retired. Herb made his living farming and logging, working for various logging contractors, the Bureau of Land Management, and eventually Brand-S Corporation’s plywood mill in Corvallis.

Peggy was a busy mother and homemaker. According to her son, David, “she knew everybody and everybody knew her.” She loved to visit and chat. She was a good seamstress and great cook who canned hundreds of quarts of food each year—much of it harvested from her garden. She was active in the nondenominational Community Church in Bellfountain. “Everybody around there called her ‘Grandmother,’ ” said David. “She didn’t have anything bad to say about anybody.”

When he wasn’t working at his job or on the farm, Herb liked to play dominoes, cards, and pool. He was a deer hunter until he was in his early 60s. He taught Jerry Don and David to hunt when they were nine or ten years old, and Jerry Don and David then taught their younger siblings. He retired from Brand-S in 1971. 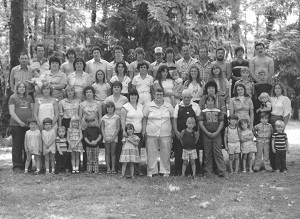 Herb and Peggy fostered strong family ties and children were always a big part of their lives. They had nine children of their own, but the house was always full of many others. “Kids liked to come to our house because they knew they were welcome and they could always get a good meal,” said David. The Ballards were generous with what they had. The attitude of helping children rubbed off on their offspring, and as they reached adulthood, all of the Ballard children got involved with children in some way. Most of them still live in the Monroe area, or have returned after an absence, and many have hosted exchange students, have been involved in the local schools and sports programs, and so forth.