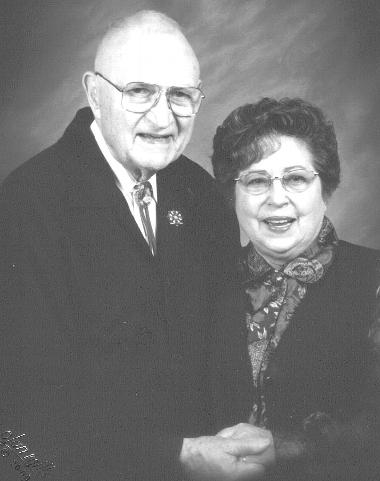 Jean Scheel was born July 1, 1911, on a farm near Emporia, Kansas. He graduated from Kansas State and was working for the Extension Service in Kansas when World War II began. Since he was in an essential occupation, he was not drafted, but he volunteered for the Army in 1942. Rather than being sent overseas, he was assigned to the Signal Corps and spent the war in Ft. Monmouth, New Jersey, where the Army benefited from his knowledge and background in printing and publications. After his discharge from the Army, he found a job in the administrative offices of the Extension Service at Oregon State University where he worked until 1971. He lived in Corvallis until 1992, when he moved to the Alterra Villa at Courtyard retirement community in Albany.

Margaret Butler Scheel was born October 27, 1923, near Dallas, Texas. She spent her childhood in Texas and Oklahoma. During World War II, she worked at Douglas Aircraft making the fuselage for B29 bombers. She married and had two children: a daughter Phyllis who was born in 1945 and a son Tommy Lee, who was born in 1951.  While raising her family, she helped operate her husband’s farms. She also worked for about ten years at Gibson’s, a retail store in Texas, and ran a cafe for several years. Margaret was widowed twice and was ready to escape the job of caring for a rural home when she decided to move out West. She moved to Alterra Villa at Courtyard a month before Jean moved there. Jean invited her to join him at a ballroom dance class at Linn-Benton Community College, and they were married about six months later on June 13, 1992. Margaret is Jean’s third wife; he has several stepchildren.

Jean has always been quite active in community and professional organizations. He has been a member of the Corvallis Rotary Club for more than fifty years, and has served as its president. He was District Governor in 1974-75. In his work with Rotary, he has been an active supporter of the Foundation’s projects, events, and goals. He served as president of the Corvallis Men’s Garden Club and was active in the Corvallis Chamber of Commerce as a liaison between OSU and the Chamber. Jean is a long-time member of the First Presbyterian Church in Corvallis. He served as a member of the board of the Oregon Museum of Science and Industry (OMSI) in Portland and was involved in national leadership for the Northwest Adult Education Association.