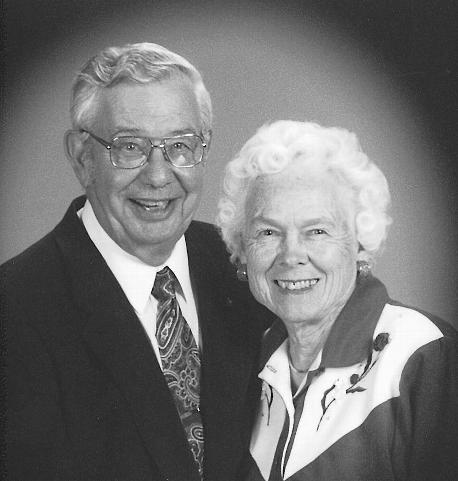 Horace B. “Ace” Cheney was born in Emerson, Mills County, on December 15, 1913, in a southwest Iowa farmhouse. His parents were Harold F. and Margaret Anne (Annie) Cheney. Dorothy Cheney was born February 23, 1915, in Oak Park, Illinois, outside of Chicago, to parents Theodore and Lillian Remsen. Ace and Dorothy met in January 1939 at a dance. Ace was working at Iowa State University in Ames and Dorothy was taking a course to expand on her bachelor’s degree in home economics, which she’d earned at the University of Wisconsin. They met again months later at Ohio State, where Ace had begun graduate work and taken an assistantship and Dorothy was working at the Faculty Club. They were married September 3, 1940. Ace and Dorothy raised three children: Roberta (Robin), born in 1942; Katharine (Kay), born in 1945; and Harold (Hal), born in 1949.

Ace originally went to college to learn the skills that would help him when he returned to the family farm. After graduating from Iowa State with a degree in farm crops and soils, he took a job with the Soil Conservation Service, making soil maps in Iowa, Missouri, and Wisconsin. He was then hired as a pasture forage specialist with the Cooperative Extension Service, a position that usually went to extension agents with years of experience rather than twenty-two-year-old, newly graduated college students.

After a visit from the head of the program at Ohio State University, Ace made the decision to pursue agronomy as a career rather than return to the family farm. He was offered an assistantship and completed his Ph.D. in soil fertility in 1942. Ace and Dorothy returned to Ames, where Ace took up a joint appointment in agricultural economics and agronomy, as well as a job with the Agricultural Experiment Station and the Extension Service. During the war years, he served on war boards in addition to his regular jobs, offering job instructor training to help make use of what work force was left for food production.

The Cheneys spent ten years in Ames before moving to Corvallis, where Ace took a position as head of the soil science department at Oregon State. They spent the next forty years in their home at 3744 NW Van Buren while taking an active role in a variety of professional and community organizations.

Ace joined the Corvallis Rotary Club in late 1952, just before the club voted to start BCF. Ace served as president of Rotary in 1963. His professional associations include active membership in, and serving as president of, the National Soil Science Society and the American Society of Agronomy. He was made a fellow in these societies and in the Crop Science Society of America and the Soil Conservation Society of America, among others. He was president of the Western Society of Soil Scientists and spent more than twenty years representing the Agricultural Experiment Station on the Governor’s Soil Conservation Committee.

Dorothy was a member of the OSU Folk Club and the PEO Sisterhood and presided over each organization in the late 1950s. She served as president of the Women’s Association and was active on various committees in the First Presbyterian Church of Corvallis. For several years she worked with alumni groups of Tri Delta sorority at OSU. After watching BCF grow through member contributions from Corvallis-area Rotarians, Ace and Dorothy decided to start making more substantial contributions.

Ace and Dorothy established this fund in 1997.  Distributable income from the fund is applied to BCF administrative costs.