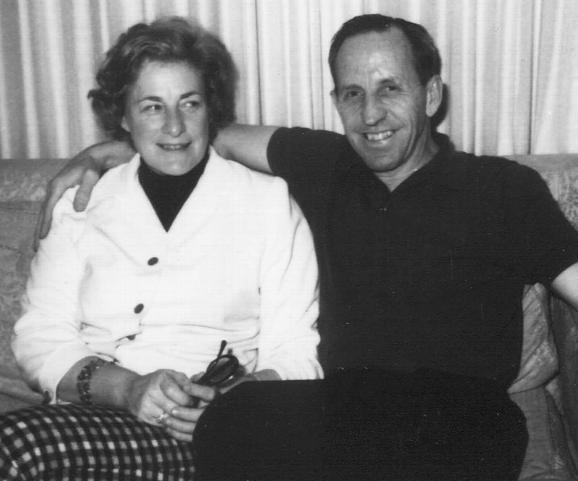 Roger Bruce Williams was born January 2, 1910, at The Dalles, Oregon, where he graduated from high school in 1928. He attended Stanford University, then came to Corvallis in 1935. In Corvallis, he worked at the Williams Store, one of a four-store chain originally owned by his grandmother. Roger worked in the stores in Eugene, Salem, and The Dalles during his high school and college years.

Geraldine McGrath—“Gerry” to friends—was born April 11, 1911, in Los Angeles, California. Her father, a doctor, died when she was 10 years old. Her mother remarried when Gerry was in junior high school, and the family relocated to The Dalles. Gerry graduated in 1929 from The Dalles High School, and went on to study art and secretarial science at the University of Oregon. There she was a member of Pi Beta Phi sorority and enjoyed playing sports. Gerry started work for the A.M. Williams Department Store in The Dalles in 1931, working in all departments including serving as secretary to Mr. Carl Williams.

On January 25, 1936, Roger and Gerry married.  They had been friends and tennis partners in high school and began dating after Gerry returned to The Dalles from college. The couple had two daughters: Gail was born in 1940 and Gwen was born in 1942.

In 1940, Roger and Geraldine purchased Snyders Shoe Store on Madison in Corvallis and renamed it Roger’s Shoes. Roger was store manager and buyer of shoes, Gerry bought the sportswear and other clothing items, and both took care of the bookkeeping. Two years later, Roger opened another Roger’s Store in Lebanon, which remained open for ten years. After four years in the Madison Avenue store, Roger’s Shoes moved to Third Street. After eight years, Roger’s Shoes & Apparel took over on the corner of Third and Madison. A couple years later, the Williams briefly opened a small campus store on Monroe Street, run mostly by students. That store closed after two years. Roger ran the stores, along with the help of students from the university and some very dedicated workers. Two of the three original employees stayed with Roger’s for forty years, and another two for twenty-six—a testament to Roger’s managerial finesse.

The Williams thoroughly enjoyed Corvallis, especially as a place to raise their two girls. Living close to the Oregon State University campus, they were able to take advantage of many activities for their children.

Besides managing his stores, Roger was very active in city and community affairs. He was the president of the Chamber of Commerce, Rotary, and the Benton County TB Association, which recognized him for outstanding community service. He was a twenty-year member of the Corvallis Board of Adjustment and the Planning Commission. He was also an active participant in various sports. He was the Corvallis tennis champion in the late 1930s, but golf was his greatest love. He presided over the Oregon Seniors Golf Association in 1970–71. He was a member of the Corvallis Country Club and could often be found playing the course. Roger used his interest in sports as a way of reaching out to some young boys in need, the residents of the Farm Home school. Roger and an OSU basketball player would schedule regular games for the boys at the Children’s Farm Home. The boys so looked forward to those days that Roger would usually find them waiting for him and the OSU student out on the front porch. His involvement with the boys began when Williams Store would outfit the children with shoes. As a charter member of the OSU Beaver Club, Roger enthusiastically supported Oregon State sports, donating much of his time to the club. He also held memberships in the Corvallis Elks Lodge, Junior Chamber of Commerce, and the Downtown Retail Merchants Association.

Roger died November 11, 1971. Geraldine successfully ran the store until it was sold in 1979. Geraldine passed away in 1997, but lives on through the fond memories and loving adoration of her two daughters and her grandchildren.