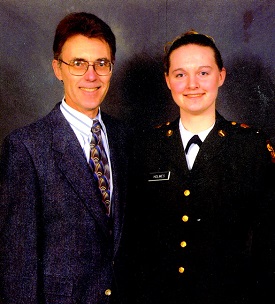 Michael D. Holmes and Kathleen C. McHarness Holmes contributed to this Endowed ROTC Scholarship Fund to honor members of their family who have served in the military and to support and encourage members of Oregon State University ROTC who have chosen the same path. Michael’s and Kathleen’s families have a long history of military service to our country dating back to the American Revolution. Michael received a bachelor’s degree in business administration in 1969 and was commissioned a second lieutenant from OSU ROTC. He served on active duty for two years, including one year in the Republic of Vietnam, and left the military with the rank of captain. After his military service, Michael returned to OSU and earned a bachelor’s degree in chemical engineering in 1979, a bachelor’s degree in electrical engineering in 1995, and a master’s degree in electrical engineering in June 2005. Kathleen also attended OSU, earning a bachelor’s degree in art in 1972. Kathleen and Michael’s daughter, Emily Holmes, graduated from Western Oregon University in 2007 with a bachelor’s degree in history. She was a member of OSU ROTC from 2002 to 2004 and was the recipient of a Military Science scholarship from BCF in 2004. Although Emily was unable to complete the ROTC training due to a health condition, she has remained a committed supporter of Army personnel and OSU ROTC. Michael and Kathleen’s second daughter, Mollie Holmes, also attended OSU in the Honors College, and graduated in 2008 with bachelor’s degrees in mathematics and art. The Holmes family believe that people who choose to serve our country through military service—during either times of conflict or peace—are special, and they desire to honor and support their choice.

The Mater family has proudly given three generations of military service to our country.  Milton and his son, Scott, served their country with honor and followed that service with distinguished civilian careers. Scott’s son, Josh, followed his grandfather and father in military service. Josh was commissioned a second lieutenant after graduating from Oregon State University. Milton Mater’s seventy-five years were packed with a mixture of military service, the creation of several businesses serving the forest industry, and contributions to his community and state in engineering, the arts and sciences, politics, and economic development. When he died in 1991 an editorial in the Corvallis Gazette Times called him “A Rare Person, one of those people whose contributions to society and the community transcend what mere mortals seems able to accomplish.” The editorial concluded: “Corvallis owes a large debt of gratitude for his unending effort to make this a better place to live.” 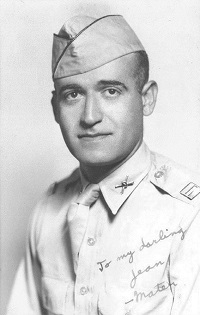 Milton H. Mater joined the National Guard at seventeen and served for five years in World War II.  Following the war, he continued as a reserve officer, commanding the Army Research and Development Unit in Oregon and applying his expertise in antiballistic missiles until his military retirement in 1972. He was awarded the Presidential Legion of Merit for his defense contributions, including organizing and chairing two national Army Research seminars held in Corvallis. He was captain of Company F of the 361st Infantry Regiment fighting on the Italian Front. He earned a commission as a lieutenant in the Coast Artillery in the National Guard while concurrently graduating as cadet colonel in the Army ROTC and receiving a commission in the infantry. Milt established Mater Machine Works and Mater Engineering in Corvallis, pioneering and inventing sawmill automation equipment, acquiring an international reputation and receiving numerous awards for his impact on the forest industry. He was named the 1965 Oregon Engineer of the Year, received the Gottschalk Award from the Forest Products Research Society in 1973, and received the Lincoln Arc Welding Award for sawmill design. He authored more than 100 technical papers for the industry. Milt’s diverse activities included chairing the Southwest Oregon Museum of Science and Industry, chairing the first seminar on Research and Development for the State of Oregon, and organizing the popular Opera Dinners in Corvallis with Portland Opera singers. He was given a lifetime honorary membership of the Corvallis Area Chamber of Commerce and was active in Benton County Republican politics.

Michael “Scott” Mater, Milt’s son, was born in Corvallis, where he resided for the rest of his life. He graduated from Oregon State University in 1971 and followed in his father’s footsteps with a commission in the U.S. Army. Upon returning from active duty, Scott joined the family engineering firm as director of forest products engineering projects. He worked side-by-side with his father, his mother Jean, and his wife Catherine—all professionals in the forest products industry. He received his Professional Engineer (PE) license in mechanical engineering from the State of Oregon in 1971, quite by chance receiving the same PE license number his father was issued when he received his PE in mechanical engineering in the 1940s. Scott subsequently received PE licenses from the States of Washington, Idaho, Arizona, and New Mexico. An expert in the forest products industry, his professional engineering career involved him in projects all over the world. His work focused on sustainable forestry development—finding ways to both sustain the earth’s resources and the communities that utilize forest resources. Scott’s passion for politics lead him to two terms on the Corvallis City Council from 1972-1975, including the council presidency in 1974. In 1975 he married fellow council member Catherine Galati, an OSU undergraduate at the time. They simultaneously served on the Corvallis City Council for several years. Scott’s other main interests focused on the Corvallis community and its children. He served in a leadership role in helping to shape the Corvallis Riverfront Park, which culminates at the Corvallis Skate Park that he designed for the community. He became interested in soccer when his two sons, Joshua and Jason, began playing on Corvallis teams. Michael died at age 53 on December 23, 2002, of complications from a fast-growing cancer. He left behind not only the legacy of his family, but one of caring for his community and natural resources. He also left memories in the minds of many young soccer players in the Willamette Valley. At the time of his death, Scott was one of the Willamette Valley’s senior soccer referees. 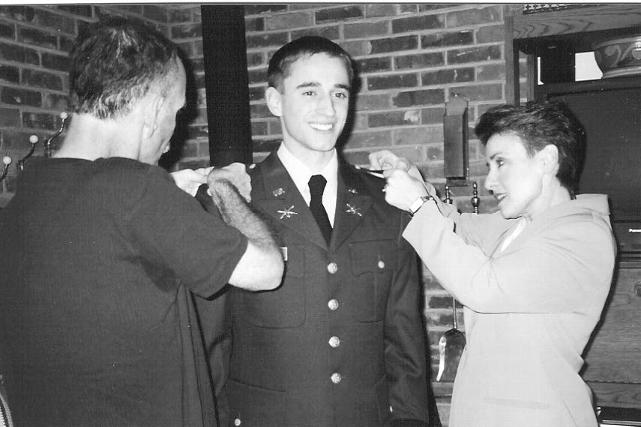 Following in his father’s footsteps, Scott’s and Catherine’s oldest son, Joshua Mater, was commissioned as an Army officer in early December 2002. Lieutenant Colonel Michael Rainbolt and the OSU ROTC staff came to the Mater home to commission Joshua so Scott could see it. Scott pinned on one gold bar; Catherine did the other. Josh entered Oregon State University in the fall of 1998, majoring in geography. Because of plans to study in Japan, he compressed the first two years of ROTC course work into his freshman year. Following his exchange to study Japanese in Japan, he returned to OSU to complete his degree and attain his commission in Air Defense Artillery. He has served on active duty in South Korea.

The legacy of support to the military is not confined to the Mater men only. Dr. Jean Mater served on the Defense Advisory Committee on Women in the Services in the 1970s and has continued to support military men and women through the Military Officers Club of Corvallis. The ROTC program has played a significant role in the lives the Mater family. It is appropriate that they be honored and remembered with this Endowed ROTC Scholarship Fund. 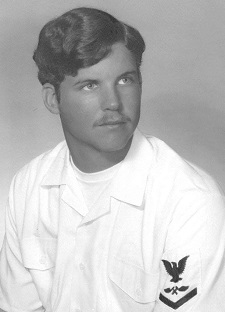 Timothy A. Vevoda was born on November 22, 1955, in Honolulu, Hawaii, graduating from Deerfield High School in Deerfield, Illinois, in 1974. Timothy enlisted in the U.S. Navy in July 1975, beginning six years of active duty and was married in 1980. During active duty, Timothy served on three aircraft carriers in the Pacific Fleet: the USS Oriskany, the USS Coral Sea, and the USS Ranger. His primary duty as an Aviation Metal Smith was to work repair hydraulic and pneumatic systems in Vietnam era F-8 and Phantom F-4 fighter aircraft. During the last two years of active duty as a certified aircraft welder, Timothy earned the position of supervisor of the aircraft welding shop at Naval Air Station Fallon, Nevada, where all active U.S. Naval Squadrons practiced bombing runs. Among his most memorable military experiences at NAS Fallon, Timothy enjoyed letters of commendation for repairing visiting aircraft, thus sending pilots home to their families and squadrons after unscheduled mechanical delays. Bombing runs were often rough on airframes. After an honorable discharge in 1981, Timothy attended Walla Walla University in College Place, Washington and worked part-time in the Walla Walla Veterans Hospital Chaplain Service. He focused his career plans in the business world, graduating in 1986 with a bachelor’s degree in Business Administration, going on to enjoy a successful sales career with the pharmaceutical research company Merck & Co. Inc. 18 days after becoming ‘retirement eligible,’ Tim entered Oregon’s famous wine industry as Director of Operations at Belle Fiore Winery in Ashland and directed its development from construction to opening the now well known destination winery. Tim is also a Board Member on the Southern Oregon Winery Association, a Steering Committee Member and Winery Liaison for the Asante Foundation’s Oregon Wine Experience and a Rotarian with the Medford Rogue Rotary.

Tim is the proud father of: Jason, Mika (daughter-in-law), David (OSU Army ROTC Cadet 2000–2004), and Timothy M. and grandfather of Eydan and Oliver in Portland. Timothy recognizes that the strength of our future rests upon the shoulders of dedicated young people who understand and are active in service to their communities and to their country. This scholarship offers educational support and respect for these well deserving and honorable young Americans.